Published by: Rahmath August 11, 2017 Sprint
Sprint has today announced that its average download speeds are now 28-percent faster than seven months ago. according to recent Ookla data. As for which cities those are, they are said to include Atlanta, Denver, Indianapolis, Salt Lake City, and Seattle.

According to Sprint, its LTE speeds have increased by an average of 28% over the last seven months. During the same period, T-Mobile's speeds were only up 18%. Meanwhile, Verizon and AT&T were actually down 8% and 7%, respectively 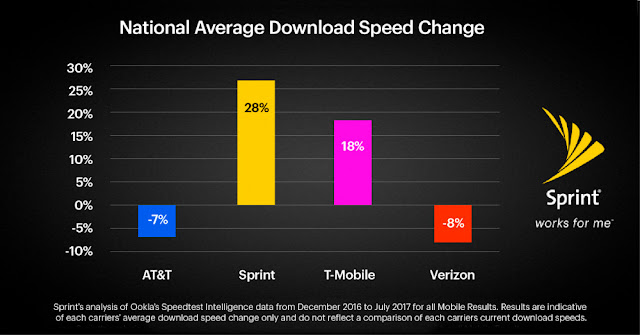 Sprint customers increasing use of High Performance User Equipment (HPUE) enabled handsets such as the Samsung Galaxy S8, LG G6 and the HTC U11 have helped increase download data speeds by as much as 30%.
Source: Sprint