Published by: Rahmath September 19, 2015 Google, Wi-Fi
Google is apparently fixing to launch a number of new devices, including at least that promises to be a wireless access point of some sort, if recent applications filed with the Federal Communications Commission (FCC) is anything to go by.

Google has already released Wi-Fi products before, like the actual OnHub router, but whether this particular new upcoming device will have anything to do with it or whether it will be something completely new is anybody’s guess. Online speculations seem to suggest everything from an extension or a repeater to be used with the OnHub, to a smart Gigabit router compatible with Google Fiber.

Goes without saying that there’s very little to go by at this stage apart from the image included herein, along with a small description from Google about the device, which comes with the FCC identifier – A4RGFMN100. According to Google’s filing with the FCC 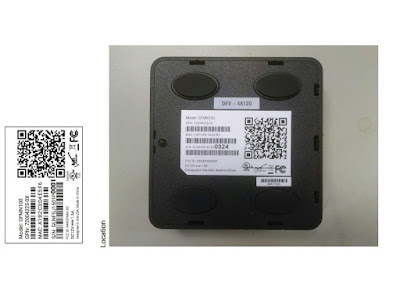 Google has filed for certification of some of its devices with the FCC in recent weeks. last week itself, the company had filed yet another tool for FCC approval, which came with the identifier A4R-WT1, and was described by the company as a  ‘connectivity bridge’. Another filing  earlier this month was for a “Multimedia Tool with BLE, two.4Ghz and 5GHz WLAN Radios“, according to Google's description of the tool, which is being rumored as being the next Nexus Player, although there's nothing concrete available by way of knowledge at this point in time.
Source : androidheadlines