Published by: Rahmath June 27, 2018 Google, Pixel 3
The Google Pixel 3 and the Google Pixel 3 XL are on the horizon, and leaks are starting to flow before their launch, but a new leak on Wednesday gives us an even closer look at Google’s upcoming new flagship phones. With the Galaxy S9 and LG’s 2018 flagship Android phones now behind us

The Leaker @OnLeaks  has today posted a collection of CAD-based renders showing off the design of the Google Pixel 3 and Google Pixel 3 XL in full from all angles.

In MySmartPrice's report, . The Pixel 3 jumps from 5-inches to 5.4-inches and the Pixel 3 XL makes a smaller jump from 6-inches to 6.2-inches.

The render of the Pixel 3 XL shows the phone with two front-facing cameras, a feature that's consistent with rumors about the new phone. There's only one rear camera on the new XL, however, at a time when other Android flagships are going the dual-camera route. 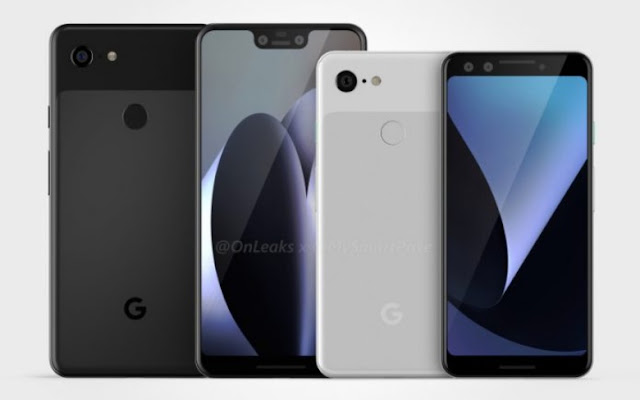 The images are also in line with previous leaked renders for the Pixel 3 and 3 XL. Those rumors had the larger of Google's next phones adopting a notch on its display, just like a host of other Android phones this year.

Otherwise, the Pixel 3 and Pixel 3 XL will host a USB Type-C port on the bottom of the phone for charging and will lack 3.5mm headphone jack again this year
Source: MySmartPrice