Published by: Rahmath July 15, 2016 Xiaomi
Xiaomi scheduled a new product launch event on July 27th in China National Convention Center, Beijing. However, there’s no information regarding which products)is going to be announced in the event.

Xiaomi’s event invite on Weibo is asking fans to purchase the tickets for the event. We have already seen a purported image of the device on Weibo.

Xiaomi is rumoured to introduce its next Redmi Note smartphone featuring dual-rear camera setup. A purported leaked image had showed that the handset will incorporate two rear cameras on the Redmi Note 4.

There’s another highly-anticipated device coming from the Chinese manufacturer, surfaced online – tipped the Xiaomi Pro. It features a 5.5-inch Full HD (1080p) OLED display with AUO and packs the newly announced Qualcomm’s Snapdragon 821 processor. Might come with a 4GB of RAM and more.

As per reports from GizmoChina, Xiaomi Notebook is expected to come powered by an Intel Atom processor and will boot Windows 10 operating system, If the rumors are to be believed,  It might come in two different screen sizes Stay tuned for more details! 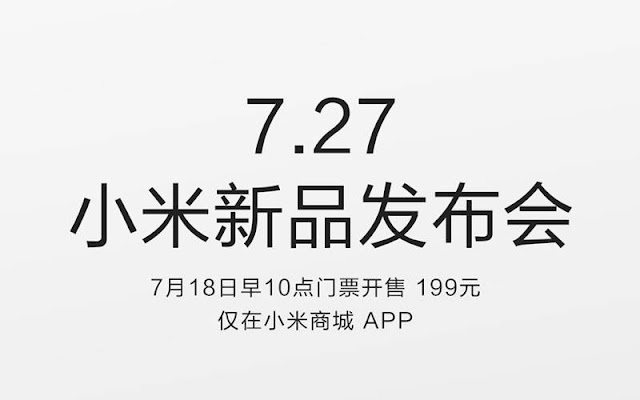 Xiaomi may launch either of the two or both phones at its July 27 Beijing event. The company has been relatively tight-lipped about either as of now, so we suggest we take this piece of information with a pinch of salt.
source : phoneradar.com