Published by: Rahmath July 25, 2016 Verizon Wireles, Yahoo
Largest U.S. wireless providers Verizon Communications is expected to announce it is buying Yahoo for about $4.8 billion before the start of trading in the US today

New York-based Verizon is seeking to add another feather to its cap. It has already acquired the AOL digital media for $4.4 billion. Verizon is the largest US phone carrier.

Verizon will pay $4.8 billion for Yahoo's Internet operations and real estate holdings, but not its patents, Bloomberg reported Sunday, as did the Wall Street Journal. Reuters reported the price tag as about $5 billion.

Yahoo will sell most of its internet business which includes YahooMail, Yahoo New, Yahoo Finance, and Sports websites. The Yahoo advertising tools will also be sold off under the deal, according to reports. 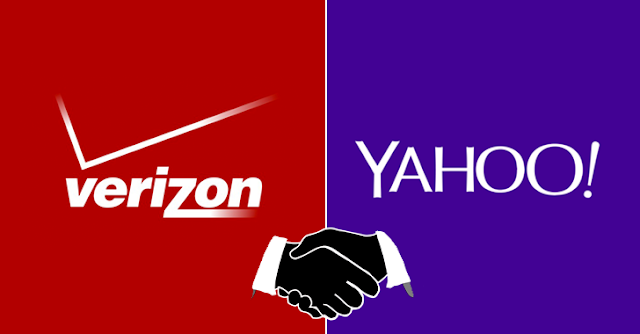 Verizon in June submitted a bid of $3 billion, but that didn’t include Yahoo’s real estate and came before last week’s final round of bidding.

Yahoo’s results for April-June quarter, which were announced on July 18 showed that the company’s revenue fell 19 percent from 2015, while its loss widened to $440 million