AT&T's  subsidiary Cricket Wireless is launching a new plan on Sunday, April 17. It offers unlimited talk, text and data for one smartphone line for $70 a month.

Cricket’s new plan offers unlimited talk, text, and data for $70 per month, though that price will drop to $65 per month if you enroll in Auto Pay. One thing to keep in mind is that while your data is unlimited, Cricket does cap LTE download speeds to 8Mbps and 4G speeds to 4Mbps. Cricket also says that mobile hotspot is not available with this plan

Remember, Cricket runs on AT&T’s network, so you get all of that nationwide connectivity that AT&T customers would get. That’s part of the sell here to T-Mobile customers, since T-Mobile is still known as having an inferior network to AT&T and Verizon. It’s certainly gotten better in recent years, but T-Mobile has a ways to go 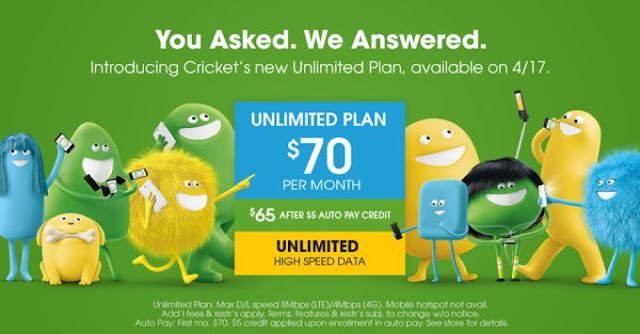 Apparently, Cricket is also willing to credit $100 off customers’ bills, should they switch over from T-Mobile. It also called T-Mobile’s minimum charges “Very Uncool,” considering that it charges at least $25 more per month for its Simple Choice Unlimited Plans, and has a smaller network for 4G LTE.
Source: Cricket Wireless