Published by: Rahmath March 21, 2016 Apple, iPhone SE, SmartPhones
Apple has just announced the iPhone SE, a new 4-inch smartphone that offers a smaller and cheaper option to the company's flagship iPhone 6S and 6S Plus

The phone has a 4-inch display and the same general dimensions as the iPhone 5s. In fact, the iPhone SE looks almost identical in design to the iPhone 5s, including the chamfered, sharper edges of the device. The only difference is that those edges will be finished in matte, unlike the iPhone 5s.

The iPhone SE features the same matte chamfered edges found on the iPhone 5s. But inside it's been vastly upgraded, including all of the camera improvements already found in the iPhone 6s, such as Focus Pixels, True Tone flash, and panorama capabilities up to 63 megapixels. In addition, users can capture HD video with support for 4K at a resolution of 3,840-by-2,160 pixels. 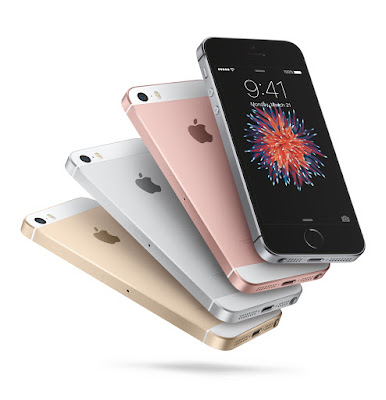 The iPhone SE starts at $399 for a 16GB model, with the upgrade to 64GB bringing the price to $499. For users still on a contract carrier in the US, it will be free on a new two-year term. Orders will begin on March 24. Four colors are available with matte chamfered edges: Silver, Gold, Space Gray, and Rose Gold.